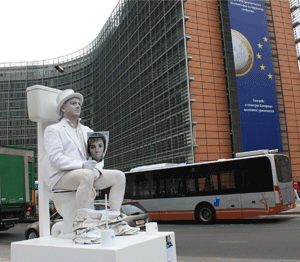 The event that was organized to celebrate the 1st World IBD Day took place in Schuman Roundabout in Brussels, nearby the place where the European Commission is seated. The place and time were well-chosen because many people could get to know about the event. Tourists who wanted to see the building of the Commission, the inhabitants of Brussels changing an underground to a bus and vice versa and also the workers of different departments of the European Commission that had a break for lunch had the opportunity to see the event.

The representatives of the associations belonging to EFCCA gathered at eleven in the morning. They came from many European countries: France, Belgium, Great Britain, Sweden, Finland, Slovenia, Hungary, Italy, Switzerland and Poland.

Many leaflets were distributed. They included information about what IBD and EFCCA is. Toilet paper with a question: “Do you know what IBD is?” was also handed out. There were also funny postcards presenting variously decorated toilets with a toilet bowl playing a central role.

A huge attraction that interested almost every passer-by was ‘the toilet man’. A toilet bowl with a high level cistern was put on a platform. There was sitting ‘the toilet man’ with his trousers pulled down! People’s reactions varied a lot – some of them were disgusted and others were delighted. The majority of people liked it very much. Provoked by the view, they were asking why the toilet was placed in one of the busiest areas of Brussels. That gave an opportunity to converse. The organizers acted that way because they wanted to emphasize the importance of IBD. Spending much time in a toilet is very embarrassing for many sick people. They often feel that they have a poor social life and the topic of defecation is a taboo topic. EFCCA Chairman, Marco Greco, gave many interviews to journalists from radio and television.

When we finished the action we had a free time until 5 p.m. The meeting in the EFCCA office began at 5 p.m. The organizers prepared food and drinks and were talking about the preparations for celebrating the 1st World IBD Day and also about their visit in the European Commission, which was very fruitful – 20 minutes prolonged to 70 minutes.

In the evening we met for dinner in an Italian restaurant nearby the EFCCA office. We had an opportunity to exchange the experience gained in our countries and to talk about the plans of individual associations. Everyone was talking eagerly about the forthcoming 14th European Youth Meeting that will be organized by J-elita.